Combining a rich corpus with Keras in R 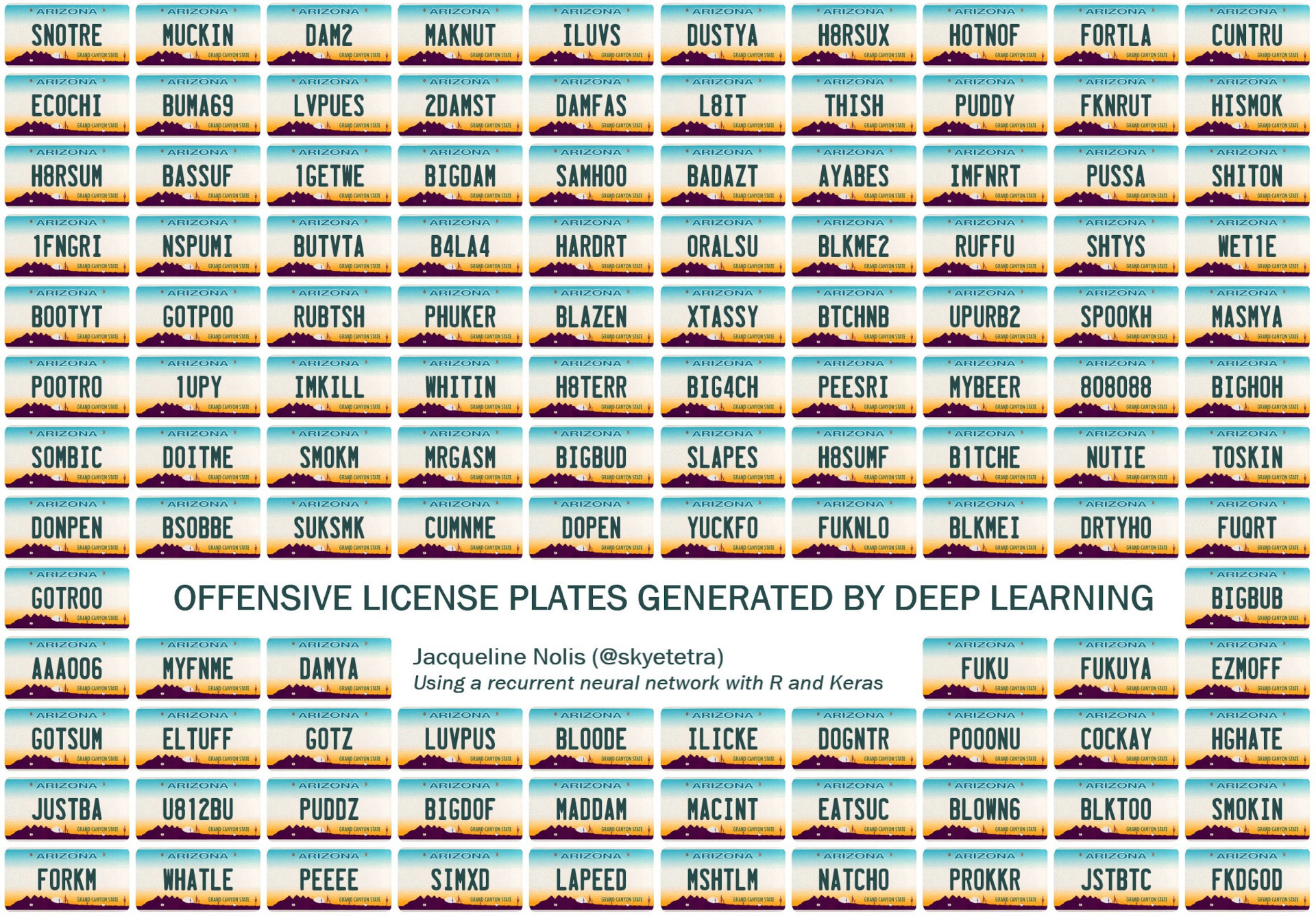 If you’ve been on the internet for long enough you’ve seen quality content generated by deep learning algorithms. This includes algorithms trained on band names, video game titles, and Pokémon. As a data scientist who wants to keep up with modern tends in the field, I figured there would be no better way to learn how to use deep learning myself than to find a fun topic to generate text for. After having the desire to do this, I waited for a year before I found just the right data set to do it,

I happened to stumble on a list of banned license plates in Arizona. This list contains all of the personalized license plates that people requested but were denied by the Arizona Motor Vehicle Division. This dataset contained over 30,000 license plates which makes a great set of text for a deep learning algorithm. I included the data as text in my GitHub repository so other people can use it if they so choose. Unfortunately the data is from 2012, but I have an active Public Records Request to the state of Arizona for an updated list. I highly recommend you look through it, it’s very funny.

The next step was to actually learn how deep learning works and write the code. Since I do most of my work in R I was hoping to use that, and thankfully Rstudio has a package ‘keras’ which makes this easy to do. While the tool itself is easy to use, I had to piece together an intro to deep learning myself through perusing the internet. In retrospect, I probably should have just bought a book. The rest of this post is my summary of what I learned so that other people can read it and figure out how to generate their own fun text. If you want to see my actual code, check out my GitHub repository.

A colloquial intro to how deep learning works for text generation

When people talk about using deep learning to generate text, they almost always are referring to Recurrent Neural Networks (RNN). These are a special form of artificial neural networks that work well on sequences of data points (for instance, a sequence of words in a book). Ignoring the mathematics behind this, the idea is that given a sequence of words, for example “this is a boring example of a sequence of words,” we can train a model that predicts a word in the sequence based on the words in the sequence before it (and the order of the words). So we pick a small number of previous words to consider before we pick our next word. If our number of previous words was 3, then our small sequences would create a data set that looks like:

Since the recurrent neural network can’t deal with words and instead needs numbers, we arbitrarily assign each word to a number. For instance, a = 1, boring = 2, this = 7, and so on. Then our data becomes:

But unfortunately even this is still too complicated for the RNN. We need to represent each number as a categorical variable by converting it to a binary vector. So for example, we could code the 5th of 7 words as a binary vector of length 7 with only the fifth element as a 1. (0,0,0,0,1,0,0). If we do this for our whole dataset we get:

This is now data that the RNN can work on. The model will fit to it, and then we can give it a set of three previous words and have it guess what the next word will be. Since there are many possible next words, what ends up happening is the model produces a combination of all the possible words with different weightings that add up to one. These represent the probabilities of each word being next:

To generate a sequence of words, we pick three words as a starting point, and then draw the forth word by sampling from what the model predicted as probabilities of each of the words. For instance in the example data above if we used that predicted next word distribution as a set of weights of possible words, we could draw from the sample. If we drew the second element that corresponds to the word “boring” which would be the next word in the sequence. We then put that into the sequence and use the most recent elements in the sequence to generate the fifth word and so on.

Setting up the license plate data

For the license plate data, we had to make a few alterations to this main idea.

Using R and Keras for Tensorflow

I ended up using three different technologies stacked up on each other to run the model. These terms get thrown around a lot, so it’s best to clearly distinguish each one:

I figured out how this stuff all works by following the text generation example of the keras package. I ran their code line by line to understand how it worked, and then modified it for my license plate project. To get the code running you need to install TensorFlow and Python, which the RStudio package helps you with.

Their example text generation code really only does a few key things:

Once I had the model working, I took a bunch of randomly generated plates and threw them in an image. All together this project took me around 8 hours, and that would have been faster had I not had a few off-by-one errors in my code. I was extremely happy with how it turned out, and am surprised at how straightforward the whole process it. If I had known it would be this easier I would have done it months ago. If you’re interested in deep learning I highly recommend you get a text corpus and try generating new text yourself. It has taught me a ton about the process and I feel much more equipped to use deep learning for more advanced projects. The code and data is available on GitHub so you can try making offensive things yourself!